“You’re Dead To Me,” Why Estrangement Hurts So Much 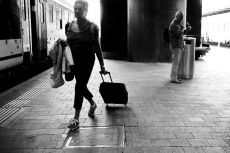 During the early stages of researching family estrangement I received a phone call from a woman named Cathy*. She didn’t want to be a part of my research. She needed to tell me something. I didn’t realise how important or memorable it would be until I interviewed more and more people and the same theme emerged. She told me that she was a mother of two children – both were lost to her. One had died from cancer in his teens and the other had estranged in her early 20s. I will never forget her words: “The pain of your child dying is incredible, but losing a child to estrangement is unbearable– it hurts so, so much more”.

When a person is estranged by a family member, they generally experience a range of immediate grief, loss and trauma responses. Bodily responses such as shaking, crying and feeling faint are common, alongside emotional responses such as disbelief, denial and anger. People often ruminate over the estrangement event or the events that led up to the estrangement. Over time, most acute emotions and bodily responses seem to decrease in intensity, and generalised feelings of hurt, betrayal and disappointment might emerge.

Even when the estrangement has continued for years or decades, many people suggest the
pain persists or re-occurs at particular times. Triggers such as birthdays, Christmas, Mother’s
Day and funerals are difficult. So are sightings of the estranged person, or hearing about them
from others. Triggers can sometimes cause a person to re-live and re-experience the initial
grief, loss and trauma responses, while other times they can be managed.  Most of the people I
have spoken to suggest that being estranged by a family member is one of the most painful
events across the lifespan.
https://www.psychologytoday.com/blog/family-conflict/201410/you-re-dead-me-why-estrangement-hurts-so-much-0

1 thought on ““The pain of your child dying is incredible, but losing a child to estrangement is unbearable- it hurts so, so much more”.”